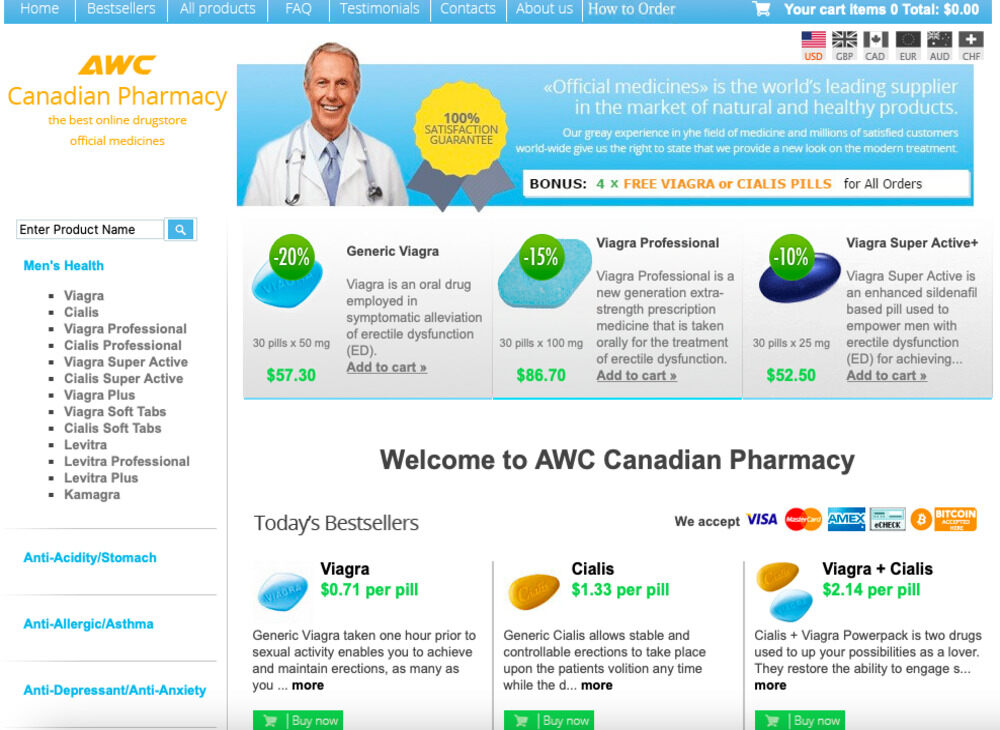 AwCanadianPharmacy.com claims to be an experienced internet pharmacy that sells sexual supplements at affordable prices. They promise complete anonymity and secure payment systems. But they have some skeletons in their closet that make it difficult to take their promises seriously.

The internet pharmacy has painted a false picture of its origins. It wants people to think that it has been around since the 2000s. However, their domain was only created on the 9th of February 2018, which raises a lot of questions about their claims.

Either they lied or the pharmacy behind the website has a longer lifespan. Of course, it should be noted that the website has not given its customers any reason to believe that it is operated by a real pharmacy.

Their ScamAdviser rating is just 1 percent. They have a decent number of years under their belt. Though, they are still young. Their SSL certificate is valid, showing that they take their portal’s security seriously.

But that doesn’t make them trustworthy. At the end of the day, their owner has chosen to keep his identity hidden. And despite the exaggerated claims they have made about their success, their Alexa rank is too low. They don’t have customers.

It is difficult to pin the store’s identity down because their operations are surrounded by so much vague or confusing information. For instance, the name of their website is ‘AWC Canadian Pharmacy’, or at the very least, this is what they have chosen to display on their platform.

But the ‘About US’ page calls the company ‘Official Medicine’ which doesn’t sound like a business name. Their contact page encourages patients to assume that they hail from the US. But they cannot prove that their business address is legitimate.

If that wasn’t disturbing enough, their name is clearly designed to make people think that they are a Canadian pharmacy. But that is not true. If it is, they have failed to prove it. All in all, it is difficult to figure them out, especially where their origins, current location, and company name are concerned.

Their owner cannot provide any clarity on this issue because no one can contact him. After all, his identity is a mystery. You could use the email addresses and phone contacts they provided. But if you don’t know the owner’s identity, you have no way of knowing who you’re talking to.

The design of their site hasn’t done anything to put people at ease. It is far too bland and messy. The content is even worse because it doesn’t provide any concrete information about the drugstore and its operations. It is also littered with errors.

The platform has no way of defending its claims of legitimacy because CIPA has already revealed that it doesn’t recognize them as a member, proving once and for all that they are not a legal Canadian internet pharmacy.

LegitScript did not do them any favors when it called them ‘rogue’. It also dismissed the company’s claims of legitimacy by revealing that it had completely failed to meet its standards.

They deal with generic medications, specifically sexual enhancers. They argue that they also sell ordinary pills that treat regular illnesses like diabetes and herpes but those claims are questionable. They don’t ask for prescriptions. However, they have attempted to put people at ease by saying that they have doctors who write prescriptions for customers.

Payments on the platform are made using credit cards. They do not accept any other form of payment as written in their FAQ section. Specifically, you must use Visa.

But according to the badges on their home page, they accept:

They use regular airmail and express courier for deliveries. You must wait for 8 to 21 days depending on the shipping method.

If you are tempted to buy from them because the reviews on their platform are so positive, you should know that those reviews can’t be trusted and the drugstore has failed to secure customer feedback on external sites.

Every internet pharmacy that falsely claims Canada as a country of origin should be dismissed as a scam, which is why this one gets 1 star.

They don’t deserve your attention.