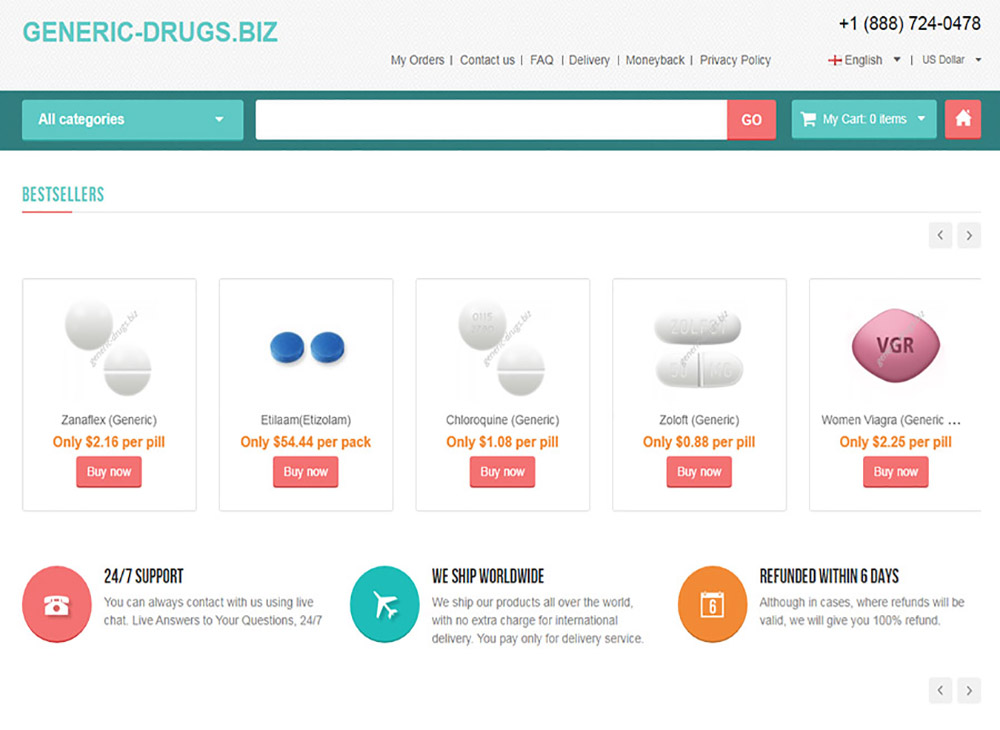 Generic-Drugs.biz is a Russian medical site that sells drugs it acquires from unknown suppliers. It offers its services over the internet. Even though it claims to have several years of experience, the site is relatively new, which is why you should tread carefully when buying medicine from them. Any medical firm that chooses to lie about important factors such as the age of its operations cannot be trusted.

Despite the claims it has made, this is a young internet pharmacy that was created on the 14th of August 2017. It started its business three years ago. That should sound some alarm bells for those of you that have experience with online drugs.

ScamAdviser gave the website a rating of 64 percent. That is average. It isn’t bad but that doesn’t make it encouraging either. ScamAdviser appreciates the fact that they have a valid SSL Certificate. This should give suspicious customers some confidence in the security of the platform.

Unfortunately, they don’t have any other positive aspects to offer. Their Russian roots are a sign that they are dangerous. Russia is a high-risk country that various international organizations have condemned for participating in a variety of fraudulent activities.

This is why you are expected to apply caution whenever you transact with a Russian site. The owner isn’t helping matters by remaining a mystery. His anonymity could be interpreted as a sign that he has a lot to hide. The pharmacy cannot afford to attract such suspicion.

The suspicion surrounding the company can be blamed on the false information it has provided. According to its web pages, the drugstore started operating 15 years ago. But that claim contradicts the domain age.

Yes, they are young. It is also true that they have ties to a high-risk country. But none of those elements prove that they are a scam. More importantly, for all its faults, Russia has produced several legit websites.

Additionally, the internet is filled with young but trustworthy internet pharmacies. On their own, those two elements can be explained away. The same cannot be said for the claims the store has made regarding its age.

Simply put, the owner has chosen to tell a blatant lie. That is a problem because such behavior is normally found among scams. You don’t need any other reason to dismiss the store. The fact that they have lied about their age means that you cannot afford to trust the information they have provided.

And unfortunately for them, they don’t have enough tangible evidence on hand to authenticate any of the things they have said. They expect you to simply trust their word. But they have given you plenty of reasons to classify them as liars.

LegitScript is also unconvinced about the legitimacy of the platform, which is why it has categorized them as ‘rogue’.

The internet drugstore’s catalog is filled with pills that treat sexual ailments. This is, more or less, what you expect to see in a portal of this sort. They have a money-back guarantee that entitles clients to a refund if the company sends them the wrong package. But that guarantee is only viable in cases when the package in question wasn’t opened.

The money-back-guarantee is designed to assuage patients that have doubts about the quality of the platform’s drugs. Refunds are supposed to happen within six days.

The sexual enhancers on the platform are very cheap. Some of them are 15 percent cheaper than those found on rival sites. The store blames the low prices on the fact that so much of their merchandise is an inexpensive generic copy of the branded version. Deliveries are made using:

You don’t have the option of tracking your package. The company only delivers to countries where the importation of medicine is legal.

For a website that claims to have over a decade of experience, it is strange to find that they have no significant presence online. Their customer reviews on TrustPilot are average. Some people have accused them of fraud.

Even though the website is relatively well-designed, it has failed to prove that it is a legit source of drugs which is why it earns a rating of 1 star.

We belive you should stay away from them.