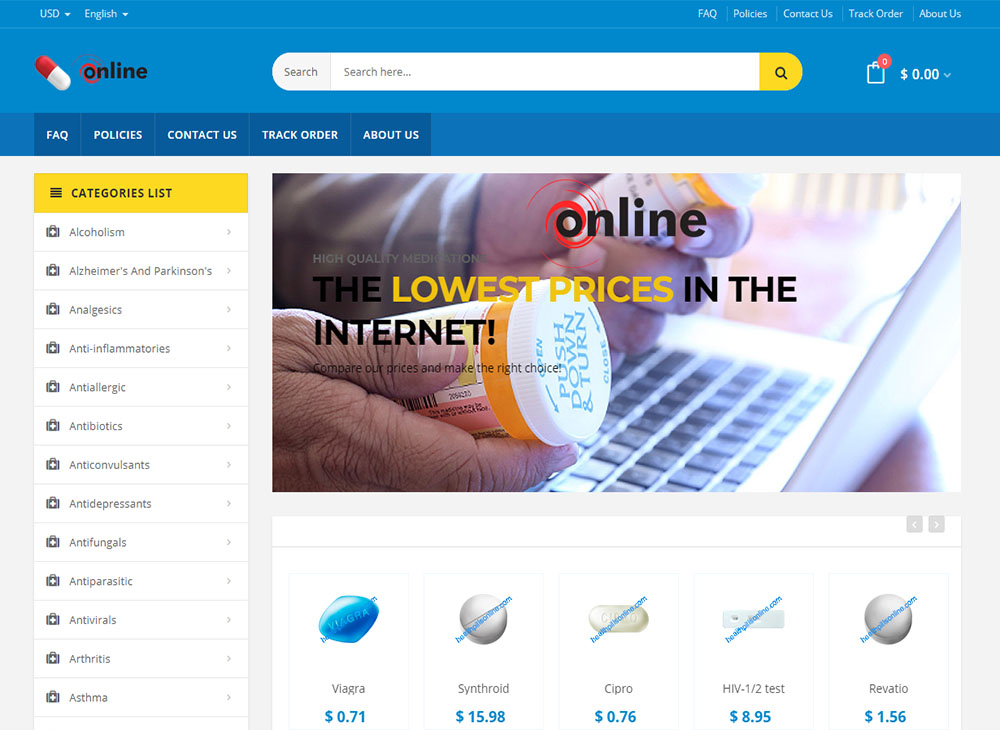 HealthPillsOnline.com is a drugstore that buys medicine from India and then resells it to various countries around the world. It makes most of the common claims. For instance, it supposedly uses 128 bit SSL software to encrypt all the information customers enter. This is supposed to put patients at ease, assuring them that their personal, financial, and medical data is protected. And if this claim was true, it would be encouraging. However, there are so many holes in the store’s business profile. It tells a number of lies, which is why it is impossible to believe any of the claims it makes.

The domain was created on the 29th of June 2019. That makes the website a little over a year old. The domain’s registration will expire in 2021. That isn’t far from now. Clearly, the website doesn’t expect to remain in business for much longer.

More importantly, it hasn’t been around long enough to give you a definitive reason to trust it. The domain age doesn’t prove that it is a scam, but it doesn’t disprove this assumption either.

ScamAdviser gave the platform a poor rating of 41 percent. This should worry you. The same goes for the low Alexa ranking which shows that people have chosen to give the store a wide berth. The site’s setup involved six countries, including:

This is a problem. A website’s setup should only involve one country. The presence of multiple nations is never a good sign, especially when one of those nations is the Czech Republic, a high-risk country.

The company’s business profile is highly suspicious. It has a business address (6 Kolokotroni, 1st floor, office 6, Nicosia, Cyprus) that is associated with Centralux LTD. In other words, the website wants you to believe that it is owned by Centralux LTD. Most online stores don’t bother to publish their business address. This normally proves that they have something to hide. It also suggests that they only exist as websites rather than tangible business entities.

The presence of a business address here is supposed to trick you into believing that the internet pharmacy is a legit business. But that isn’t true. While Centralux LTD was a real company, it was dissolved. It no longer exists.

As such, this drugstore’s suggestion that it is owned by Centralux LTD proves that the owner is a liar. All the available evidence points to Russia as the portal’s country of origin. This is even more damning. Russia produces a lot of scams, which is why it is perceived as a risky country.

But that isn’t the only reason why you are encouraged to dismiss the store as a scam. Their ‘About Us’ page says that they have been around for 12 years. This is the most blatant lie they have told so far. The domain age proves that they are less than two years old. As was noted above, the website lies so much that you cannot believe any of the claims it makes.

Considering all the falsehoods it has told, it shouldn’t come as a surprise to learn that LegitScript has categorized the pharmaceutical firm as ‘rogue’. It doesn’t meet their most basic standards.

If you choose to make any purchases from this platform, you should know that their catalog primarily consists of sexual enhancers from India whose quality cannot be determined. Prescriptions are required but only in some cases. If your country doesn’t care about prescriptions, the drugstore won’t ask you to present one. This is a red flag.

Because the medicine they sell originates from India, and all their products are generic, their price tags are very low. Their payment options are limited. They only accept credit cards. They use standard and express international airmail to ship medicine to most countries around the world. Their fees don’t exceed ten dollars.

Trustworthy websites like TrustPilot haven’t published any reviews and testimonials from customers of this company. This is another nail in their coffin.

Anyone that looks at this online pharmacy’s attributes will agree that they deserve a rating of 1.5 stars. Their profile is filled with secrets, gaps, and suspicious information.

They can’t be trusted.