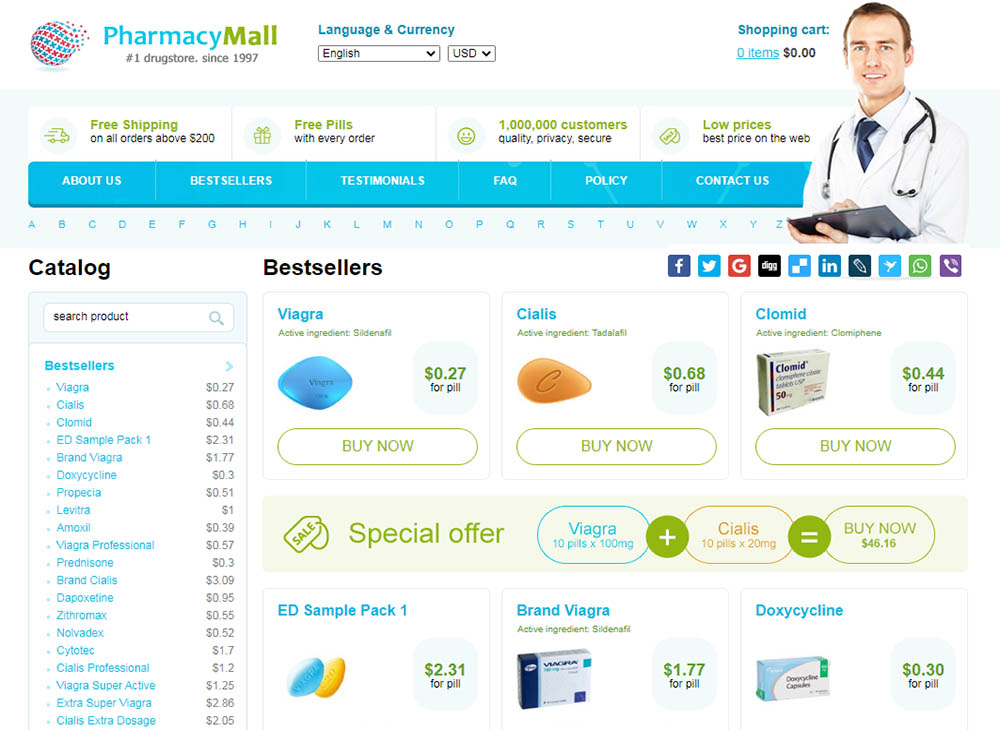 Safe-Pharm.com looks just like every other online store that sells generic medicine that treats sexual illnesses in men. It also makes the same promises, which is why it shouldn’t surprise you to learn that the internet pharmacy is dangerous. It is either a scam or the host of a scam. Either way, you are better off finding a more reliable source of drugs. This one will only disappoint you.

The domain is just as abysmal as you might expect. It was created just a few months ago, specifically on the 20th of March 2020. They have been in operation for less than a year. How can you place your trust in a platform that has so little experience? The company is associated with far too much risk. You are better off giving your money to a business that has been in this industry for several years.

ScamAdviser has chosen to take a more lenient approach to this site. After looking at various data points, it gave them a rating of 65 percent which is far more generous than they deserve. It was impressed by their SSL Certificate.

Admittedly, this is a big deal. The presence of an SSL Certificate speaks to the security of the store. It tells you that hackers are less likely to steal the information you choose to volunteer to the site. That being said, a valid SSL Certificate isn’t that difficult to secure.

Even though ScamAdviser gave the company a strong rating, it also noted its many weaknesses. For instance, their traffic is low. You can safely conclude that they haven’t had that many customers in the months since they opened their doors.

In fact, they cannot even prove that they have ever served a single customer. That won’t come as a shock once you realize that their website isn’t optimized. This is either the result of laziness or a sign that they are just a scam that doesn’t care about attracting traffic. They are most likely only interested in defrauding the few visitors that come across their domain every so often.

A site like this isn’t afraid to garner bad press because it is young. It doesn’t have any sort of reputation to protect, which is why it can close down at a moment’s notice once it is accused of committing fraud.

Admittedly, no one has proven beyond a shadow of a doubt that they are a scam. But the reverse is also true. No one can prove that they are legit. They haven’t helped their case by hiding all the information that a suspicious patient would use to authenticate their claims.

That includes a business address and the identity of the owner. Their design adds to the suspicion. The store’s platform feels somewhat cluttered and uninspired in its look. Their name is just as bland and it isn’t even connected to their domain name.

The internet pharmacy has several seals on its website, including:

As you have already guessed, none of those seals are real. The platform is not Canadian, which is why CIPA hasn’t certified them. LegitScript calls them ‘rogue’. You should never do business with a pharmacy that isn’t supervised by a regulatory organization. They are too risky.

If you believe their claims, they sell everything. They want people to think that the platform’s catalog has every drug they could possibly want. But they are only interested in sexual diseases and their related treatments.

Like most online drugstores, this one expects its clients to use credit cards and electronic checks when they make payments. Their platform is compatible with all the major credit card brands. It is worth noting that their drugs are too cheap to be genuine. Any item you buy from them is most likely counterfeit. EMS and trackable courier services are used for shipping.

You can conclude that they don’t have real customers because no one can find any of their customer reviews and testimonials on the internet.

They have every attribute that you find in dangerous scams. They get 1 star and we think you should avoid this pharmacy.

It is impossible to defend this internet pharmacy.