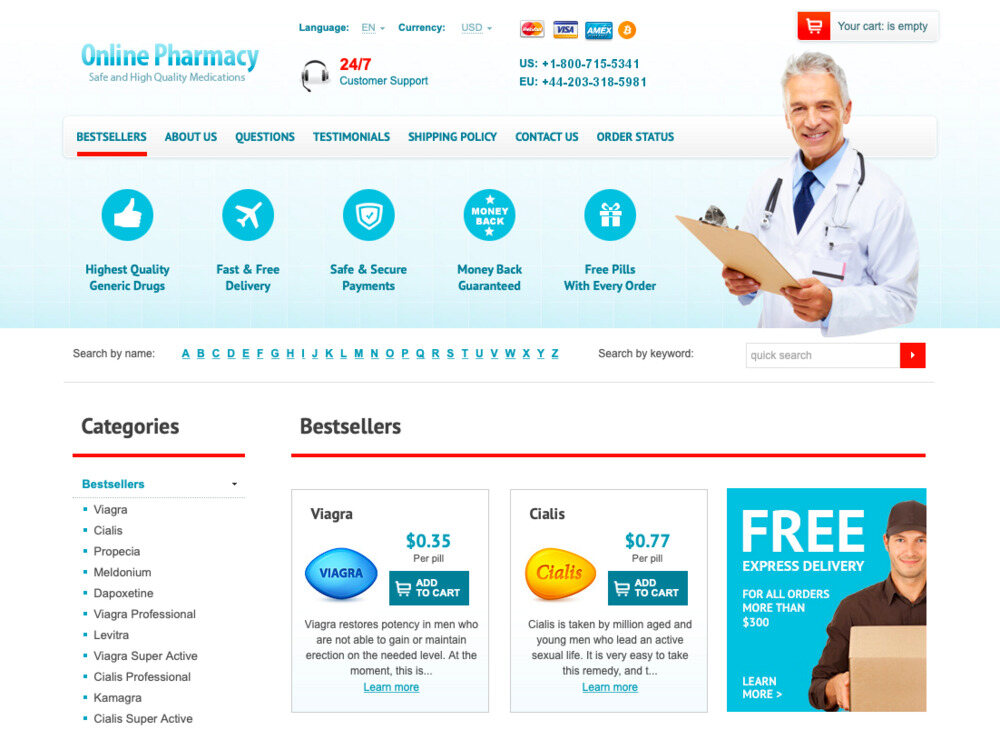 TopCanadaDrugs.net is neither a Canadian website nor a top online drugstore. They keep making ridiculous claims about who they are and what they can do. But any attentive shopper can tell that they are not quite as impressive as they want everyone to believe.

The domain, which was created on the 21st of March 2016, will attract a lot of positive attention to the store because they are not quite as young as the other fraudulent stores in the pharmaceutical arena.

They have the look of a young, untested internet pharmacy. But their domain age doesn’t support that assumption. They have been around for more than five years, which works in their favor because people tend to trust older sites. Though, this one has so much baggage that many consumers will choose to dismiss it despite the strong domain age.

They do not have related websites. ScamAdviser was impressed by their age. But it gave them a trust rating of 1 percent because their domain age was not enough to compensate for the owner’s anonymity, negative reviews, and the many suspicious sites on their server. They don’t have an SSL certificate. It is also impossible to ignore the fact that their host is located in a high-risk country.

The absent SSL certificate is a big problem. It tells you that the platform’s security is shoddy, so much so that you cannot afford to share your financial information with them. It is just as dangerous to volunteer your personal and medical information.

It looks like they are based in the Czech Republic. If you did not know, the Czech Republic is a high-risk country. A lot of platforms alienate customers by failing to publish verifiable business addresses. It shows that they are referral services rather than tangible pharmacies and they only exist on the internet.

This one will alienate customers because the business address they published makes them look like a scam. Interestingly enough, the business address on their contact page hasn’t been verified. Many professionals in the industry will encourage you to ignore it because dozens of medical shops have published that same address.

Simply put, by trying to trick people into believing that they are legit, the portal only succeeded in proving that it can’t be trusted. This explains the owner’s decision to remain anonymous.

The most damning aspect of their profile is the malware report that was detected for this website. At some point in the past, some form of malware was found on the site. This cements the suspicion that the online drugstore is insecure. It would be a mistake to buy medicine from them because doing so would force consumers to share their credit card information.

By now, you have probably realized that the company is not Canadian. Their name says otherwise. But their business address already proved that they are not based in Canada. If you need additional proof, check CIPA.

They have a database of all the legitimate sites operating in Canada. You won’t find this store in that database because it is neither Canadian nor legitimate, which is why they received a ‘rogue’ classification from LegitScript. This should be enough to prove to you that they can’t be trusted.

Their catalog is small.

It includes products such as:

It won’t surprise you to learn that the quality of their medicine cannot be determined because no one knows where they sourced the drugs from.

Not only is the origin of their drugs a mystery but their prices are very low, forcing people to conclude that their merchandise is counterfeit. They will have a difficult time convincing shoppers otherwise.

They accept payments that have been made using electronic checks, Visa, and AmEx. EMS courier delivery and Airmail are used to deliver packages to clients around the world.

Their testimonials page includes names like Wei Zhang, Oliver Scott, and Tristan Corring whose fake reviews have appeared on other fraudulent medical sites.

Their shady profile, which includes several fake reviews and a poor ScamAdviser rating, earns the store a rating of 1 star.