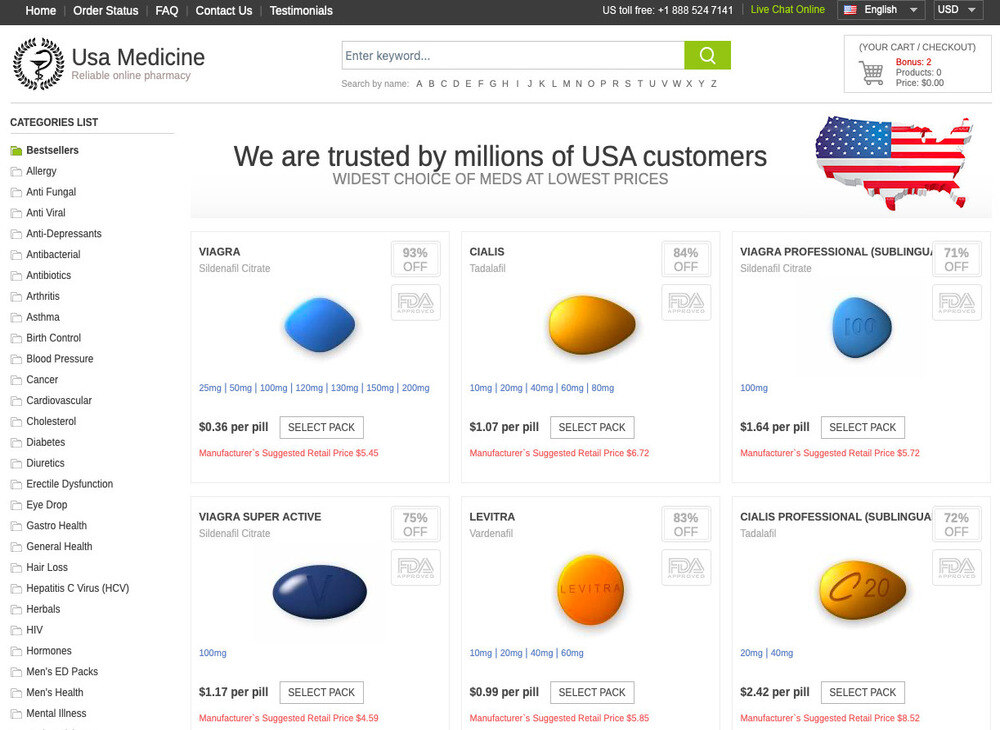 Is UsaMedicineGet.com as reliable a drugstore as it claims to be? Does it truly have the trust and respect of millions of American citizens? More than likely, you have never even heard of them, and that tells you everything you need to know about their claims. A store with millions of American customers would have a recognizable brand. This one is obviously lying. That tells you that they are not quite as legit as they would like you to believe.

The worst attribute a shady store can have is youth. Legitimate pharmacies can get away with a problematic domain age because they have so much going for them that their youth cannot hurt them. Unfortunately for this store, they don’t have any strengths to lean on.

As such, the fact that their domain was created on the 8th of September 2020 is merely the final nail in the coffin. Consumers have no reason to put their trust in a store that has been in operation for less than a year.

If that wasn’t bad enough, their domain’s expiration date suggests that they won’t be in business for much longer. You cannot afford to leave your financial information in their hands.

ScamAdviser is even more skeptical of this platform than you may think. They were assigned a rating of 5 percent. That isn’t the lowest rating the resource can assign but it is in the vicinity. They don’t have any legs to stand on.

Their abysmal rating can be imputed to several factors that ScamAdviser.com’s algorithm noted, including their problematic domain age, Alexa rank, poor SEO, and the abundance of websites with low ratings on their server. You should keep an eye on some of their mirror sites, which include BuyBestMeds.com.

Their business profile is surprisingly vague. They look like they might be American. The information on their site definitely pushes people to make this assumption, and the same goes for their phone line, which is American.

But that is hardly definitive proof. In fact, it doesn’t count as evidence. All that information was provided by the pharmacy, which means that you have to trust their word. However, why would you? They haven’t given you any reason to conclude that their business is above board.

The authenticity of their phone line is still in question. If they wanted people to believe their claims, they should have provided a business address. If they had a business address, you could use it to determine, once and for all, whether or not they have offices in the US.

But they have chosen to keep that information hidden. They have applied the same tactic to their owner. Why would a drugstore with millions of consumers hide its identity? Every other legal medical shop on the internet goes out of its way to operate with transparency. But this one has done the opposite. It has chosen to hide every major facet of its business.

Again, if they have all those millions of consumers from the US, organizations like LegitScript would have certified them. But they haven’t done so. LegitScript went so far as to call them rogue because they don’t deserve your trust.

If you still have doubts about their legitimacy, it might surprise you to learn that they don’t ask for prescriptions, a failing that is common among scams.

Their generic pills are cheap. But that is to be expected. A generic medicine is inexpensive in most countries. They accept a variety of credit and debit cards, including JCB and MasterCard. They offer several shipping methods, such as EMS and Registered Airmail. But if you study the seals on their platform, you will realize that they appear in that same arrangement and design on other medical sites. They are forgeries.

If their customers numbered in the millions, they would have reviews and testimonials everywhere on the internet. But it is the opposite. They don’t have any reviews.

The internet drugstore has failed to dispel any of the suspicions its weaknesses have attracted, which is why it earns a rating of 1 star.